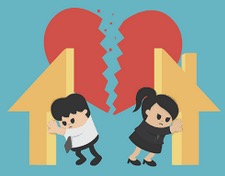 After an Experian Survey results concluded that 59 percent of divorcees say finances played a role in the breakup of their marriage.

During marriage, credit can also be an issue. Nearly a third of those polled said their former spouse’s credit score was a source of stress during the marriage, and just 35 percent of divorcees said they and their ex agreed on how to use credit as a couple.

Still, there’s no denying that divorce can add significant financial burden. The average amount of financial loss reported by survey respondents was $19,922. A significant percentage of people incurred greater-than-average losses, with 23 percent reporting losses of $50,000 or more. Fifty-five percent incurred court costs associated with divorcing, 53 percent paid divorce attorneys, 21 percent paid for mediation, and 16 percent experienced costs for parent education classes. Real estate was also an expense for some, with 11 percent facing fees to record a deed and 10 percent paying to refinance a mortgage.

Ending the marriage did not relieve financial worries for many. Half still worry about their finances after getting divorced, with concern highest among women, those whose spouse was the primary breadwinner, and parents. More than a third (34 percent) said their divorce financially ruined them, including women (38 percent), parents (40 percent) and those whose ex was the primary breadwinner.

Know whats on your Credit Score/Report

How to order credit reports